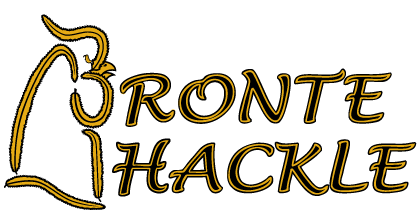 The history of Bronte Hackle

Why take on this challenge?

I was always interested in poultry and kept a few chickens as a boy. So when I got a chance in 2006 to acquire David’s flock I could not resist. Getting to combine my interest in fly-tying and my love of poultry in the one hobby was an opportunity not to be missed.
My first job was to see if I could get the birds to breed. I was told some of the birds could be 10 years old and this would normally be considered to be too old to breed from. It was a bit of a challenge but once I had got them breeding I was up and running .Next I had to build up the flock so I could begin taking the first steps in this long process and start selecting birds to breed from.
Along the way I took some of my hackles to a few local angling shows in Northern Ireland and found there to be an interest in what I was doing. This inspired me to launch my own hackle brand and name it after my mother’s famous family connection the Bronte family.
Bronte Hackle was born!

Ten years on and with a reputation for quality hackles for traditional fly tying that continues to grow we can be found demonstrating our products at the biggest Game Fairs and Angling Shows in Ireland. We also proudly sponsor the award for top fly tyer at the Irish International Fly Fair.